But if you’re here and you’re seeking something fun on the cheap, let me introduce you to patin à glace… also known as ice skating! END_OF_DOCUMENT_TOKEN_TO_BE_REPLACED

Now that I’ve been inducted into the American Women Dating French Men Club (It’s true–this is a common phenomenon. The late Polly Platt even wrote a book about it, called Love à la Française, written specifically about the matchup between American women and French men), I am constantly asked about whether or not there are any differences in having a relationship with someone from another culture. The short answer: Heck yes! 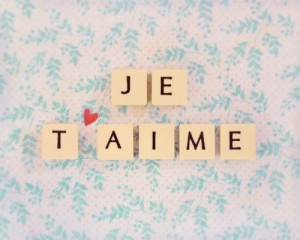 The first, and most obvious difference is one I described in an earlier post: There was no pre-relationship dating period (or hoops to jump through, or games, or mind tricks, or silly moments where one begins to doubt the credibility of the feelings they’re forming, etc.).

But there are definitely other differences–some more subtle, while others tend to be obvious. As you might expect, most of the differences are related to methods of communication. While many American men tend to circumnavigate what they really want to say in an attempt to sidestep ANY negativity or tension (read: fights), French men tend to get right to the truth. This has its pros and cons:

Me: What do you think about this dress?

American: Yeah, sure, it’s nice. But what about that other one that you have? That one you just got last week?

French: No. Your skin is too pale to wear that color.

Me: Hey, do you want to go out with me and my friends this weekend?

French: Not really, but I’ll come with you anyway.

In addition to differences in communication style, I’ve also noticed that certain activities appeal to one culture a lot less than to the other. For example:

Me: I need to go shopping. I want some cute boots!

French: Okay!  I know some good places we can go.

Me: Wow – these flowers are gorgeous!

American: Ummm… (thinking: Oh I get it. She’s trying to hint to me that I should buy her flowers.)

What these examples do not take into account is the specific issue of language. It’s easy enough for two Americans to have misunderstandings when things don’t come out right, tone is mis-perceived, or words other than those that most accurately describe one’s thoughts and feelings are used. Imagine how tricky it can be to decipher all of this with someone who grew up with a different set of words all together?!

At the end of the day, I find that the differences and challenges I face while trying to adjust to a new set of relationship rules do NOT outweigh the happiness I’ve found. What amazes me most is that despite these differences between us, being happy with someone has never before been this easy. And the craziest part? Realizing that I traveled half-way across the world for a job after a chance meeting with the man who’s now my boss and discovered way more than just a new job and a new city. Serendipity at it’s finest, I think. 🙂

The saying goes “You have to kiss a lot of frogs before you find your prince,” but in France you may only have to kiss one. Because as soon as you do you’re committed. Whether you know it or not… END_OF_DOCUMENT_TOKEN_TO_BE_REPLACED