As a follow-up to the post about my experience in Japan’s capital, here’s a collection of my favorite photos from the trip:

Last month I traveled to Tokyo for the first time. I have to say that I’ve had the desire to visit Japan for a while now, but Tokyo has never been the main draw. I have been attracted to the imagery I’ve seen coming out of some of the more rustic parts of Japan, but always assumed Tokyo was just a crazier version of New York. Fortunately, the experience I had during my week-long stay has proven me wrong.

It’s true: there are definitely some striking similarities between the two cities. Ginza resembles 5th Avenue with luxury shops lining the street. Shinjuku reminded me of Times Square with it’s skyscrapers, billboards and bright lights. Shibuya takes after Soho in it’s own way, with a focus on fashion, youth, and nightlife.

But what’s really interesting about Tokyo is where it differs from New York. The city is alive and energetic, but calm. The streets are bustling and full of people, but quiet. And Harajuku… well, nothing compares to Harajuku. Unless, of course, there’s some part of New York City where thousands of people of all ages dress up as dolls and cartoon characters and role play every Sunday.

Colorful, to say the least

During my time there, I got to see some pretty amazing things, but I know I missed out on a lot of what the city has going on. That being said, I have to admit that I was really impressed with the Sensō-ji temple in Asakusa, the Imperial Palace in Chiyoda, the shopping at Ginza, Shibuya and Shinjuku, the amazing food, the friendly people, oh… just about everything. It could be because my expectations were low, but Tokyo really blew me away.

The only thing I wish I could have done differently is visited the city during their famous cherry blossom season–kaika is when the blossoms first open and mankai is when they are in full bloom–which we missed by only a few weeks. Nevertheless, I did manage to snap a few shots of some of these extraordinary flowers, which are one of the symbols of Japan. 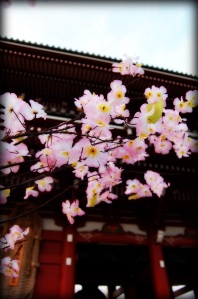 Perhaps one of the most memorable things about this trip is the fact that I was there during the first anniversary of the monumentally devastating disaster known in Japan as “The Great East Earthquake.” The city was somber, yet optimistic, and I was really touched to be among people who were remembering those they had loved and lost. There was no shortage of footage of memorials, interviews, and the destruction itself which, even one year later, took my breath away.

To sum it all up, Tokyo was awesome. I can’t emphasize enough how friendly and hospitable the people were, and it made for such a great experience. Although I’m not one of the masses who finds Parisians rude or unbearable, it was definitely a nice change of pace to be in a city where you felt like everyone was looking out for each other–even foreigners. If you have a chance to go to Tokyo, take my advice: don’t pass it up. You won’t be disappointed.