In one of my earlier posts, A New England Sports Fan Abroad, I wrote about what it was like to miss championship games because of my international antics. But after several Sundays spent at The Great Canadian–a Canadian bar (surprise!) that airs NFL games here in Paris–I can, thankfully, write about what it’s like to watch a game abroad.

One of the first things I thought about when I decided to accept the offer to work for my current company and make the move to Paris was how I would be able to watch my beloved New England Patriots every Sunday. When I lived in the States, I made a point to go to at least one home game every season (last year I upped it to two, in light of my imminent departure), and if I wasn’t at Gillette I was surely glued to a TV somewhere. I’ve definitely had to miss my fair share of games, though, and that wasn’t an occurrence I wished to become a regularity.

The 2011 season, however, was a whole different ball game–pun intended. Not only have I been traveling more (admittedly both for business and for pleasure), but I am of course living in a country where American football isn’t exactly the most popular sport around. If you ask the locals if they’re into football you’ll likely hear a resounding yes, but they’re certainly not talking about tossing the ol’ pigskin. And as if there weren’t enough obstacles to watching a sport in a country that predominantly couldn’t care less about it, I also have to deal with the six to nine hour time difference for watching games taking place in the US–arguably the most difficult element to work around.

Fortunately for me, I was referred to TGC by a fellow American expat and blogger, Michael (you can check out his blog here), and his recommendation couldn’t have been better. Not only have I been able to watch several games during the regular season, but this past weekend I was able to watch the game that turned out to be our first playoff victory since January 20, 2008. This is particularly amazing considering that the game began at a staggering  2am Paris time Saturday night/Sunday morning. Thankfully, TGC came through and stayed open for the entire game, not-so-gently kicking us out at 5:30am. I was able to catch this crucial match-up, share drinks with friends, and make it home on the metro just before the sun came up.

Just for fun, here are some pictures of myself and some friends during the course of the season at our favorite American football hangout:

The gang, dedicated and pulling an almost-all-nighter for our team!

Me on Christmas Eve cheering for the Patriots to pull ahead of the Dophins!

With Esteve/Paul/Alfonso and the Frog Prince!

It’s been a great season so far, but I’m looking forward to what comes next as the Patriots compete against Baltimore for the AFC Championship title! And thank you, TGC, for giving me a little piece of home every Sunday. Now for next week: Let’s kick some Baltimore butt, boys!

For me, the “holiday season” has always consisted of three important holidays: Thanksgiving, Christmas, and New Year’s Eve/Day. 2011 marked an interesting year for me, in which I spent these very special holidays in very different locations.

Of course there’s no where in the world to celebrate American Thanksgiving than in the United States, so that’s where I went! This trip was in conjunction with the surprise 50th birthday party we threw for my dad (which you can read about here), and my 10 year high school reunion. Take a look at our Thanksgiving table as we prepared for the big feast: 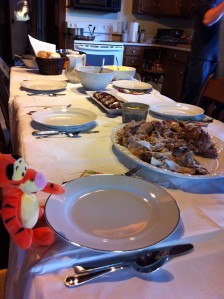 Tigger (who occasionally travels with me) is eyeing the turkey!

For Christmas, Santa brought family to me and delivered my Father on Christmas Eve! We spent 4 days walking all around Paris (and I mean ALL around), and I acted as a poor excuse for a tour guide to my guest, who was also a first-time visitor to The City of Lights. 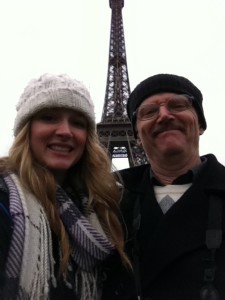 A chilly, grey day in front of the Tour Eiffel

And lastly, to ring in the New Year, my wonderful Frog Prince invited me to join him and his friends in beautiful Cadaqués, Spain — about an hour north of Barcelona. The sites were beautiful, the running was difficult (so much wind!), and the company was great. How could I ask for more? 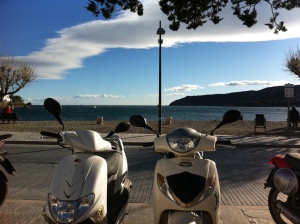 Not a postcard - a snapshot by the sea!

Hoping everyone had a great holiday season and is having an equally excellent start to the new year… as for me, I’ve got big plans for 2012. Watch out, world! 😉

Okay, not really. BUT – I did get asked to contribute to an ezine called MyFrenchLife. I said yes and my first article was recently published. You can read it here.

I’ll be writing at least one article a month, and I’ll be sure to link to my writing on MyFrenchLife over here. You know, because you are all DYING to read more of my writing. 😉

Here’s some irony for you: I arrived in Paris on May 19 of this year. On the date of my six-month anniversary of living in Paris–November 19–I spent my day traveling… to the US (more about that later).

I thought I’d take a minute to put together a little recap of the things I’ve accomplished so far, as well as the things I have yet to do. In no particular order, I present to you, dear readers, my…

Although I am proud of myself for what I’ve been able to do so far, I also have another list containing the things I have yet to do that I hope to:

All do-able, right? Now I get to look forward to May when I can see exactly how many things from this new list I will be able to cross off. 😉

Last night I attended a soiree organized by an online magazine dedicated to building a community of people who have some connection to France/the French in their lives (more to come on this in a future post).

In addition to meeting some really cool Australians, Americans and French people who are currently living in Paris, I got something really amazing out of this little shindig: Encouragement.

About to reach the six-month-mark of living here in Paris and still having only basic (though improving!) French, I often get down on myself for not having made more progress. I even wrote about it, here. And although I would argue that, among all the places in France to live, Paris is the easiest place to get by if you have only an elementary understanding of French, I expected more from myself on the language front by now.

When I arrived at last night’s event, I was unsure if I’d even be able to communicate with anyone, and was nervous that people would look down their noses at me for being a French resident who still speaks almost entirely in English. But on the contrary, I was met with a barrage of understanding and motivation! A lot of these people had come to France with little to no French training, and are now either speaking fluently or enough to communicate well in nearly every situation. And the kicker? It took them all about a year-and-a-half to get there.

“Six months?!” One woman said. “You’ve got to give yourself more time. There’s no way you could expect to be speaking a lot of French in only six months.”

“At around six months I thought I was speaking great French because I didn’t know it well enough to know the mistakes I was making. At one year I actually was more frustrated because I could hear my mistakes. Eventually you just have to stop caring and stop feeling embarrassed and it gets easier.”

I woke up this morning with a renewed sense of determination to tackle this language, and I’m grateful for the words of wisdom these fellow expats were able to share. Finding out that I’m not failing as hard as I thought I was: not a bad way to spend a Wednesday evening, eh? 🙂

As the resident native English speaker at my office, I regularly have conversations like this one:

“What are you trying to say? What’s the sentence you want to form?”

“No. I just want to know if it’s irregular.”

Though I have, as almost all American students have at one point or another in their high school careers, studied grammar–and currently think myself to be an excellent (though not perfect) user of it–I no longer recall exactly which verbs are irregular and which are regular. Do I use verbs correctly? Of course! But can I list for you even five irregular verbs in the English language without consulting my trusty friend Google or beginning to conjugate a lengthy list of verbs in my mind? No.

Because English is my mother tongue (Oh no! Starting a sentence with ‘because’ is a huge grammatical no-no! But don’t worry, I’m finishing the sentence with an independent clause. Ahh! Starting a sentence with ‘but’ is a definite no-no! But it’s okay, seeing as how this is an informal blog, and none of you are here to actually read about English grammar.), these rules are no longer rules to me. I live and abide by them. They are burned into the depths of my mind. Sort of like the rule that says you’re not supposed to steal. I don’t think about it. I just don’t steal. So now my knowledge of the ins and outs of English is being tested and I must say… Mrs. Smith probably wouldn’t be very proud.

And I’m only telling you about the verbal interrogations I receive.

On the flip-side, I look forward to the days when I will be asking for the past participle form of some seldom-used French verb to my friends. Revenge is best served verbally, no? 🙂

In an attempt to mix-up the Things I Learned lists that I bring you so often, I present you with this glorious attempt to recount the elements of my American lifestyle that I occasionally pine for.

But please don’t misinterpret this list as a secondary form of saying “I don’t like French food,” or some attempt to cling to American comforts when I should be enjoying everything that French life has to offer. Simply put, this is a list of things that I occasionally think about having or doing, and then am promptly slapped in the face by the reality that I cannot due to the lack of availability here in Paris. Here they are: