This summer I had the pleasure of attending my very first French wedding! It was a beautiful affair from start to finish, despite the threatening rain, and my French getting put to the test. The event was interesting to me on many levels, one of which being the ability for me to observe differences in ceremonies and traditions that exist between French and American weddings.

Two people in love… all you need for any wedding

In no particular order, I present to you the 10 wedding things that French and American couples do differently (in my experience):

So there you have it! And if there are any international brides/grooms or wedding crashers out there, please share some interesting traditions you’ve seen (or missed)! 🙂

In all of my rushing around the globe, I forgot to pass along the latest article I’ve written for MyFrenchLife.

Check it out, here, and get a small taste of some of the lesser-known spots I’ve scoped in this crazy country!

The moment has finally arrived. The moment when I review the cupcake shop to end all cupcake shops in Paris. The one everyone told me about, from a comment on of of my earlier cupcake posts, here, to an article written by MammaExpat over at HJ Underway, here, to recommendations I received via twitter: Sugar Daze was the must-try bakery on my list. Now it’s time to reveal whether or not the shop is worth all the buzz…

At first glance: The first few times I walked past Sugar Daze I actually didn’t notice it. It was only when I was on a mission to find the shop that I realized I had walked down that same street several times, since my doctor was located around the corner. “How could I have missed a cupcake shop?” I had asked myself as Frog Prince and I turned onto the familiar street. It even has a colorful awning and a lovely glass window displaying some delectable treats that looked more than tempting.

At second glance: Once I finally stepped inside, the overly-commercial decor of the other shops I’ve visited yielded to a simple, relatively white-walled setting… which didn’t hold my attention for more than two seconds in light of the cupcakes on display. 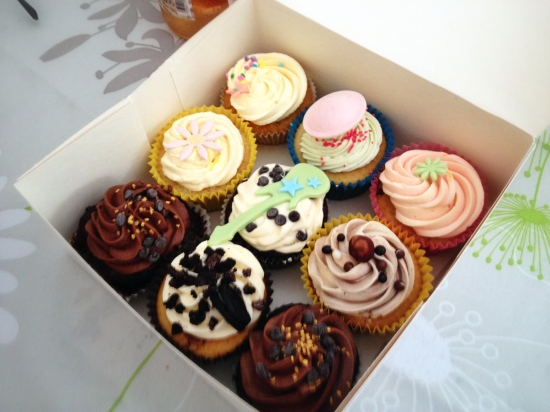 Look at these beauties! Don’t they just make your mouth water?

At first bite: As with Daisy Miller’s, I knew before taking a bite what the experience would be like. Except in this case, I was expecting, and experienced, opposite results. I went immediately for I Love Rock N’ Roll, with it’s hand-crafted sugar guitar sitting atop the perfect amount of frosting. The frosting was sublime, and the cake was perfectly moist and well-flavored (which says a lot since they had been refrigerated after buying them the day before). At Sugar Daze, Cat makes full-sized cupcakes (not those little mini ones the Parisians try to pass off as cupcakes), so we each selected a different cupcake, cut it in quarters, and shared. I can say that the second, third and fourth bites were also exquisite.

Amazing cake, perfect frosting, and a hidden surprise?! A trifecta of tastiness!

Overall: Again, I don’t pay much attention to pricing, but I can say that Sugar Daze has the best-tasting cupcakes so far (and perhaps in all of Paris), and they offer full-sized cupcakes, so the price is probably higher per cupcake but not by weight, and for good reason. Not only is the size and taste enough to make these cupcakes worth the money, but the time spent on making each one look uniquely perfect is a rare thing in the cupcake world, rendering each one worth its weight in gold. Oh, and did I mention how fresh they were? Yeah, the list keeps going…

It’s almost like I don’t even need to say this last part, but for the sake of consistency: DEFINITELY GO to Sugar Daze if you’re in Paris and craving a cupcake. You won’t be disappointed! 🙂

When I tell people that I live in Paris, I often hear things like “I love Paris! It’s so beautiful,” “OMG, Paris is so pretty!” “I love _______ (insert Parisian area/neighborhood/district of choice)! It’s so charming!” “You must love the _______ (see previous instructions)! It was my favorite place when I visited there.”

At first, the short amount of time I had spent in the city allowed me to say things like “I haven’t been there yet, but I’ll definitely check it out,” to the satisfaction of those who had now given me, the resident of Paris, a recommendation on something new to see or do. And I took as many of those recommendations as I could in the early months. But recently it has dawned on me that the more people tell me how much they love certain little pieces of Paris, the harder it is for me to relate. Why? Simple: I have spent so much time and energy trying not to be a tourist, that I have flat-out avoided some of the parts of this city that make it so… Parisian.

So I’ve made a resolution to cut that out. I don’t care if I look like a tourist or not. The truth is, I live here, and if my American accent and constant stops to take pictures annoy the people around me… too bad. I’m here now, and I’m going to make the most of it. I would regret moving away from this place without having experienced the ins and outs of such a famously beautiful, culture-rich city.

To try and get better acquainted with the Paris that lies beyond the 12th arrondissement, I spent part of my Saturday last weekend taking my bicycle along the Seine and admiring beauty that was meant to be beheld. At some point I will compile all of the photos I’ve taken in and around Paris to add to my Cities: in Photos series (which still has yet to see Kos! Bad blogger!), but in the meantime, here’s a peek at what you can see in the city when you cycle through the streets. Enjoy!

The Dark Knight is also a Perpetual Passenger

Giving you one in B&W for your photographic enjoyment

No less stunning from the river

Visiting the courtyard and gardens surrounding the Louvre never gets old…

An angle of the Notre Dame not seen often enough

Pausing for a portrait