About a year or so before moving to Paris, I was driving down the road and saw this gem of a bumper sticker:

I was offended even then, because I happen to think it’s a very close-minded view surrounding language (regardless of your views on immigration control, multi-language support should be a no-brainer). But a recent event has brought me back to my thoughts on this lovely little message.

Most of the time I’m able to get by in Paris without being reminded of the fact that I’m an outsider, but every so often it gets thrust into my face. This weekend, while talking with Frog prince as we readied ourselves for a game of tennis, I heard a gruff voice sharply say “Speak French!” I looked up to see the man on the court next to ours staring at me. He was startled by the fact that I stared back (in disbelief, on my part), and raised a hand to say, unconvincingly, “I’m just joking,” and continued on with his match.

His shocking outburst got me thinking: Of course I think it’s important to learn the local language when you relocate to a new country. So much so, that I would recommend requiring immigrants to take some form of structured language courses as a mandatory part of the immigration process. But if I am having a private conversation with someone, how dare you tell me that I should have that conversation in any other language than the one I choose?!W hen interacting on a business level (at shops, ordering food, at the post office, etc.), I make all efforts to go French or go home. But even if I were perfectly fluent in French, there’s a good chance I would still be speaking in English, at least most of the time, to my boyfriend, since that’s how our relationship got started.

At that moment, I suddenly remembered that gloriously inconsiderate bumper sticker I saw so long ago, and I asked myself: when people hear someone speaking a foreign language, do they assume that they can’t speak the local one? Has it occurred to people that someone speaking, Spanish, for example, might also speak English? Have we forgotten what it means to support each other? Is offering a telephone menu in more than one language really un-American? Because, last time I checked, it was the contrary… 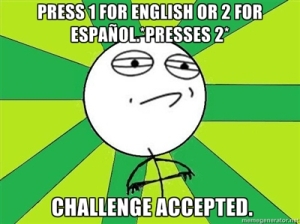 A more comical approach to the dialing debate 🙂
copyright: memegenerator.net

Until you’ve lived the life of an immigrant making efforts to learn a new local language, you can’t truly know the struggles that such a process encompasses. Remember that just because someone is an immigrant or is speaking a language other than the local one, that they probably ARE making efforts to learn, and may already be pretty well-versed in this new language. This doesn’t eliminate the benefits of offering multiple languages on phone menus, and if you’re an English-speaker, it certainly doesn’t hinder your phone experience. So thanks, most US businesses, for offering those often English-speaking immigrants the option to do some important things over the phone in their native tongue. We are not as ignorant a country as we may seem…