Competitive? Yes I am.

And I’m not afraid to admit that I’m generally a sore loser. Yeah, that’s right, I said it: I don’t like to lose. So what?

Now that the Olympics are on, I get to be vicariously competitive by watching sports that are rarely highlighted on (inter)national television. It’s great. And I get to watch everything right from the heart of the United States’ biggest rivals.

No, I’m not in China! Oh wait, they’re our biggest Olympic rivals? Well, not when you’re an American living in France. In my world, it’s “China Schmina.” Yes, I want us to win the medal race and watch my compatriots rise to Olympic glory, but what I really enjoy is when we beat the French.

Unfair advantage rooting for the US, you say? Try telling that to the US men’s 4X100 relay swim team, who were leading the race until two things happened: the amazing Yannick Agnel got into the pool for the final leg of the relay, and my dear friend Courtney (who, despite the following blunder, is cool, so check out her blog) said the dreaded words “there’s no way France is going to beat us now,” after which we were swiftly ousted from the gold medal position. Thank you both. 🙂 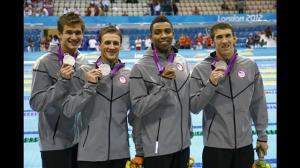 Okay, silver’s not all that bad. And they look pretty happy. But still! (Rob Schumacher-USA TODAY Sports)

My only consolation was that earlier in the day, the US men’s basketball team trampled France to win by a nearly 30-point margin. 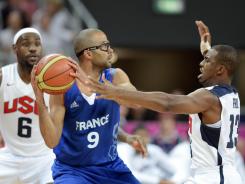 Maybe I’m just being a brat (it wouldn’t be at all out of character for me), but YOU try sitting in a room full of French people who cheer heartily against your homeland. You’d forget about China, too.

And no, this isn’t just nationalistic ignorance where I spew that the United States is the best country in the world, or some other silly nonsense. But just like the New England Patriots are my team, when it comes to the Olympics, the US is my team.

Okay and maaaaybe I admit that when the US isn’t competing, I might support France. Allez! 🙂