Saturday, May 19th marked the one year anniversary of my arrival in Paris and of becoming an expat. It has taken me two full days to recover from the celebrations to be able to write something about it.

At the six-month mark, I wrote a little check-up post, outlining the things I had accomplished and the things I still wanted to. I thought about writing this post in a similar format and addressing all of my “wish list” items from six months ago to see how far I’ve come. I may still do that, but for now, I wanted to write something a little more honest and authentic about what it has really been like for me to be an American living in Paris.

First, I want to emphasize that this past year has been one of the best years of my life. I’m having a great time, meeting wonderful new people everywhere I go, gaining a ton of valuable work experience at my job, and expanding my sense of independence and adventure. I wouldn’t trade this year for anything, and I realize I’m very fortunate to have this opportunity. Living and working abroad has always been a dream of mine, and I’m lucky to be in the category of people who gets to say they are really living out one of their dreams.

You’ve seen this one before… some of the friends I’ve met during this past year!

That being said, there is a down side to living in a country where I’m still (slowly) learning the language. I’ve written enough posts about my struggles with French–some funny, some expressing frustration–so I’m sure those who follow my blog closely enough realize, to some extent, the role that the element of language plays in my life. But over the last few weeks, I have really started to struggle with something: my identity as a non-French speaker (yet!) in this country.

Have you ever had one of those dreams where you’re in a group of familiar faces, everyone having a good time, and no one can hear you? The dream starts out fine–you know the people you’re with and you know you’re about to have fun with them. When you realize no one can hear or understand or see you, you become confused, and maybe panic even starts to set in. And then, after several desperate attempts to be heard, the only thing left to feel is frustration. This cycle is my life.

Despite this dream being the perfect analogy of what I often experience here (being in a group of friends speaking to each other in a language I can understand but cannot express myself in), not being heard in a group isn’t the issue that’s been weighing me down lately.

What a lot of people don’t understand, is that even though I’m lucky enough to have such friendly and kind people speaking to me in my language while I’m in their country, is that I often have to change everything about the way I communicate: my vocabulary, my body language, my accent, the subjects we talk about… in order to be understood.Although I’m doing what I can to learn French while working full time (in English), I can still only converse on the level of a five-year-old. It took me months to figure out why I haven’t been feeling like myself in this country, and then it hit me: I am NOT myself here. Nor can I be, until I can fully express myself in French. 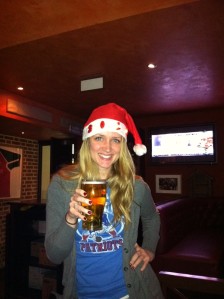 Maybe the closest I’ve felt to myself in Paris: watching the Patriots, at a Canadian bar, with my Dad 🙂

On the day of my six-month anniversary in Paris, I left for a trip to the US. On that trip, I had the strangest feeling. Of course I missed my friends and family and was happy to see them all, but it was more than that. Recently I realized what the “more” was. It was relief. Relief because I could once again be the outgoing, sometimes funny, always quirky, opinionated, non-wall flower that I’ve been for most of my adult life. When I read that sentence back, those adjectives do not resonate with the person that I am here in Paris. I have been reduced to a shy, insecure, quiet, easily-intimidated young woman who needs assistance to do a lot of things. Sometimes, I literally feel like another person has taken over my body and the “real me” is forced to sit in silence and watch the whole thing play out.

I know a lot of people who have lived abroad and who have struggled as they adjust to cultural and language differences. But most of the people I know who have embarked on a similar journey have had one important difference: they didn’t do it alone. They either moved with friends, classmates, a significant other, family, or at least knew someone well enough in the new country that they could count on. This is not to say that none of those people faced the challenges I have. On the contrary, I’m sure they did, and I know I’m not alone in feeling like I am another person while in a different country. And I definitely have people I can count on now. But the people who really know me well are a 6 hour plane ride away at best. 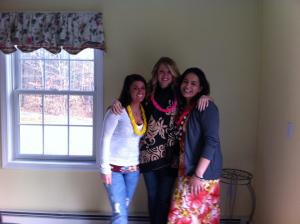 Some of the people that know me best! ❤

At the end of the day, all I can do is try to be as close to the “real me” as possible, and hope that the more I learn French, the more my true personality will come out. Then my next concern will be if all of the French friends I’ve made will still be able to stand me at that point 😉 I’m not homesick, and I have no intentions of leaving France anytime soon (sorry Frenchies!), but it’s good to reflect on the challenges you face every now and then. If you don’t recognize why you struggle, how can you know where to concentrate your efforts?