Since the dawn of time, it seems there has always been war. People have amassed to fight over differences in religion, power, money, class, nationality, borders and a slew of other causes. But over the last year or so a new cause has stirred the embers of battle: Post-it prestige.

In Paris, video game developer Ubisoft and their neighbors BNP Paribas (a French bank you may have heard about in economic news as of late) fought for the right to call themselves the Masters of Post-it Art. It all started when, in May of last year, an Ubisoft employee casually decorated her window space using post-its to create a scene from the famous video game Space Invadors. A few other employees followed suit, and other video game personas emerged on glass. Shortly after, neighboring BNP took notice and crafted their own post-it pictures, prompting an all-out war to outdo each other using armaments of creativity and paper.

Here’s a collection of some of the earlier weapons of mass construction:

Post-it Ryu: He's got a few tricks up... where his sleeves would be 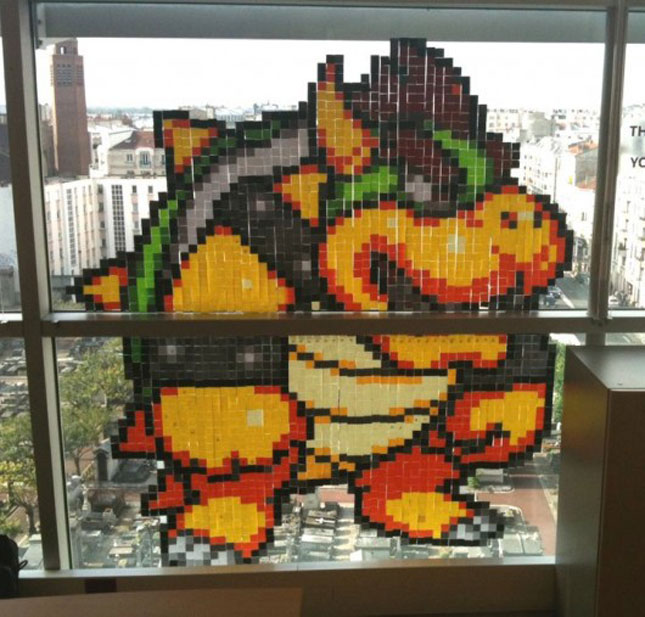 One fireball from Bowser could take out the whole army

BNP Fires back with the Pac

Though several episodes of Post-it violence broke out across Paris, Ubisoft definitely won their battle with BNP when they used their most deadly weapon: an assassin. Here are some images of the team at Ubisoft creating a three-story likeness of Ezio Auditore, a lead character in the game series Assassin’s Creed, and the finished product:

The team at Ubisoft Paris working on their final design 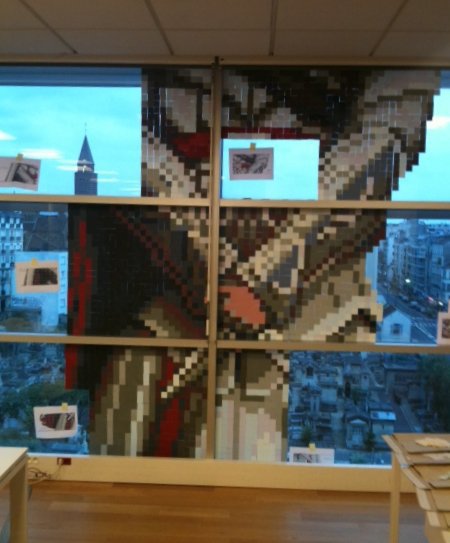 Putting the pieces together

The crowd gathers to watch the masterpiece unfold

Ezio, the Assassin, himself: not very stealth

Like many wars, this one continues to spread. London offices were under stationary siege last fall, and rumor has it that companies in New York and Seattle have also fallen victim to this new form of inter-office terrorism. There’s even an official website dedicated to tracking and capturing the latest (and seriously awesome) developments in this conflict: Post-it War. So arm yourself with Post-its, and prepare to fight!