I was riding the metro last week and saw this:

So I did what any logical person would do: bought two tickets. And that’s how I began my Friday.

My Friday ended with my co-worker and my boss coming into the office I share with very grim looks on their faces. Knowing that they had just called the agency I applied with for a flat I wanted to rent, I resigned myself to the idea that I needed to keep looking. They walked over, each placing a hand on my shoulder, and proceeded to scream “YOU GOT IT!” I pick up the keys on Wednesday.

The task of finding housing was admittedly easier than I expected it to be, but not without the help of my company. They have done so much to accomodate me, and without their assistance I fear I’d be living in temporary housing, er, permanently.

So I had a lot of work to do this weekend to make up for the hours spent away from the office looking at numerous flats. As a reward for finishing what I needed to do this morning, I decided to explore a bit of Paris. You know. Be a tourist.

When thinking about where to go on this beautiful day, I didn’t need much time to decide on the Arc de Triomphe. I’ve been to Paris several times before and had never seen it. So that was my first stop. 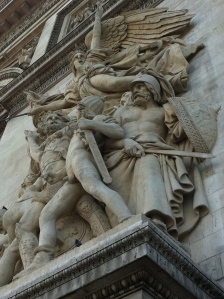 I was truly awe-struck by the Arc. It was a feeling similar to what I experienced standing in front of the Parthenon in Athens. So much history, so beautiful, larger than life…

After exploring a bit, I decided to treat myself to a delicious lunch outside at the Bistro Romain on the Avenue des Champs-Elysées:

And since the Eiffel Tower (or Tour Ee-FELL, as they say in Paris) was only two metro stops away, I thought “why not?”

Still awesome, even the second time around

Now I know what you’re thinking.

No I don’t, but it MIGHT be this: “Way to visit all the touristy things!”

And you’re right! But I know that with time I’ll be exploring all that Paris has to offer. Right now I’m still in awe that I’m even here. And am going to see Prince in concert. And have a flat. 🙂

Perhaps my Sunday outings are becoming a regular occurrence? At this point I’m batting a thousand, but who knows where I’ll be next weekend. Maybe somewhere a little more off the beaten path…